Precious Cargo is a Quest in The Witcher 3: Wild Hunt. It is obtained during the main quest Lilac and Gooseberries or The Beast of White Orchard. The nearest Signpost is: Nilfgaardian Garrison.

John Geermer is an NPC that can be found to the side of the road near a swamp, south of the Garrison. He signals for Geralt to approach and asks that you help him find his lost cargo. Use your Witcher Senses to find tracks and head towards the swamp until you reach a destroyed cart. Here, use them again to note arrows that have taken down man and horse, unlike the story you were told.

Loot the vecinity of the cart and defeat any Drowners that approach, and find the Locked Stronbox quest item that the "merchant" was missing. You will not be prompted to return and have a conversation with John, telling him:


Pursue him on horseback without letting too much distance between you or he will flee. He will ride all the way to a bandit camp where a group of three bandits will ambush you. Once the bandits have been defeated, John will reveal he is a private in the army who attacked the real merchant because he needed medicine. You can now finish the quest and gain rewards depending on your choice: 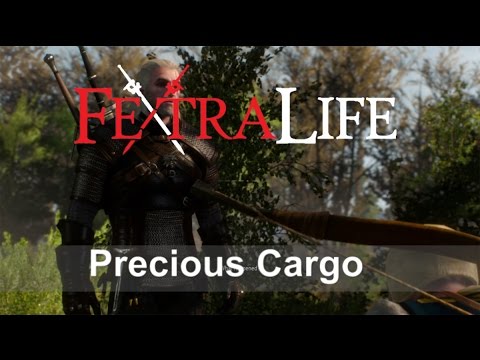