Armor in The Witcher 3: Wild Hunt are pieces of protective equipment worn by Geralt to protect himself against Enemies and hazards. Armor is divided into three main categories by their weight class: Light, Medium and Heavy. Within each weight class, Armor is further categorized by the slots they are equipped in. Players can equip one piece of armor each for the Chest, Hands, Legs and Feet and each piece of armor contributes to Geralt's overall defenses, resistance to certain effects and damage types and more. Aside from defense, Armor also affects Geralt's appearance, allowing for various aesthetic options for players to experiment with. Armor can be obtained in a multitude of ways ranging from quest rewards, loot dropped by opponents to being purchased from merchants or crafted by various armorers and more.

Quick Navigation for Armor in The Witcher 3

Throughout his adventure, Geralt will come across all manner of protective apparel offering varying degrees of protection against attacks from opponents, be it man, beast or supernatural. Armor is primarily classified into Weight Classes and each weight class has its own advantages and disadvantages in combat.

Made primarily of leather and fabric, Light Armor offers the least protection in exchange for freedom of movement, increasing the rate at which Geralt regenerates Stamina after attacking and performing other combat maneuvers. In contrast to Light Armor, Heavy Armor offers some serious heft with metal plates interwoven with thick leather, allowing for the most defense at the expense of reducing Geralt's Stamina regeneration rate, requiring you to be more deliberate with your attacks and dodges. Medium Armor strikes a good balance between mobility and protectiveness, not leaning too far into either characteristic. Medium Armor is the most common and plentiful type of gear in the game and you will not be hard pressed looking for new pieces to upgrade with.

While you can mix and match armor pierces from different weight classes, there is a benefit to wearing an ensemble with a matching weight class, particularly if you've invested in any of the Witcher School Techniques in the Skill Tree:

Do take note that there are ways to circumvent any limitations imposed by wearing a certain weightclass. See the Upgrades section below for details.

Each piece of Armor in The Witcher 3 has several properties that make them more or less effective in combat, as well as non-combat stats that relate to item class, inventory management and other interactions:

As with most items and equipment in The Witcher 3, Armor comes with varying Rarity — a stat which is denoted by a classification and color coding. In ascending order, the Rarity levels for Armor are as follows:

Typically, the rarer a piece of armor, the better it is for that level range, but this is not always the case. Rarity can influence the amount of Upgrade Slots an armor piece has, the number of Bonus Effects it can roll with, as well as the potency of those effects. Note that the same armor piece can drop in varying rarity levels, therefore you can have two or more of the same gauntlets, for example, with vastly different stats.

Many armor pieces only exist in the Relic tier and are considered unique. Witcher Gear is less of a rarity level and more of a completely different item classification, but they do tend to outclass most armor pieces of their level range. They also have certain unique properties that push them above all other equipment. See the Witcher Gear section below for details.

Aside from the standard properties and Upgrade Slots available on Armor, they can also roll with varying amounts of Bonus Effects which further boosts their effectiveness in different situations. 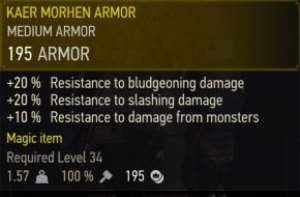 Armor Bonus Effects typically improve your resistance to various damage types, but can also provide effects such as increased critical damage, sign intensity and experience gained from defeating opponents. Armor Rarity will typically influence the Bonus Effects found on armor, with rarer armor allowing for more effects at once and with greater potency. For Common, Master and Magic tier armor, these effects are typically randomized. Relic armor have a mixture of randomized effects, as well as fixed effects for some of the more unique armor pieces. All Witcher tier armor have fixed effects.

Glyphs are special items that grant various bonuses to Armor, just as Runestones do for Weapons.

The bonuses granted by these Glyphs typically improve the intensity of Geralt's various Signs. With the Hearts of Stone DLC, more Glyph types are added which give more varied effects such as improving Vitality regen or elemental resistance. Each type of Glyph comes in 3 tiers: Lesser Glyph, Glyph and Greater Glyph, with higher tiers increasing the potency of the bonus granted. See the Glyphs page for a full list of glyphs and their effects.

With the Hearts of Stone DLC, a new type of Armor upgrade is made available in the form of Glyphwords. These are Armor enchantments that can be imbued exclusively onto Chest Armor only. Only one Glyphword can be enchanted onto a piece of Chest Armor and only on those that have 3 Upgrade Slots available. A single Glyphword will take up all 3 slots, preventing you from adding any more Glyphs. However, these Glyphwords have substantial effects and can change your playstyle drastically or complement your preferred skillset, making them well worth the exchange.

Some of the most interesting Glyphwords to use are Levity, Balance and Heft, the effects of which make the game treat all of your equipped armor as Light, Medium and Heavy, respectively. This means that while wearing all Heavy Armor with the Levity Glyphword on the Chest piece, you gain the benefit of improved Stamina Regeneration as if you were wearing Light Armor pieces, while still retaining the higher defense that Heavy Armor provides. Additionally, using any of these Glyphwords will allow you to benefit from the bonuses granted by Cat School Techniques, Griffin School Techniques or Bear School Techniques, even while wearing mixed pieces of armor from different weight classes.

Witcher Gear is a separate classification of Weapons and Armor. The majority of these items belong to a Set named after one of the various Schools of Witchers. Each of the major schools has a complete set comprised of a Steel Sword, Silver Sword, Chest Armor, Gauntlets, Trousers and Boots. Some schools also have matching Crossbows. Each piece of Witcher Gear must be crafted from scratch using Diagrams which can be found in specific locations spread all across the world. These diagrams are the objective of the special Scavenger Hunt quests that Geralt can embark on.

The levels and stats of these pieces of equipment are fixed and do not scale to Geralt's level in any way, but they are some of, if not the best equipment you can use within their level ranges. Furthermore, each Set of Witcher Gear can be upgraded to the next tier, increasing their levels and stats. This process involves finding the Diagrams for the next corresponding tier and then using your current pieces along with various materials to craft the upgraded equipment at a Blacksmith or Armorer. There are five tiers of Witcher Gear available: 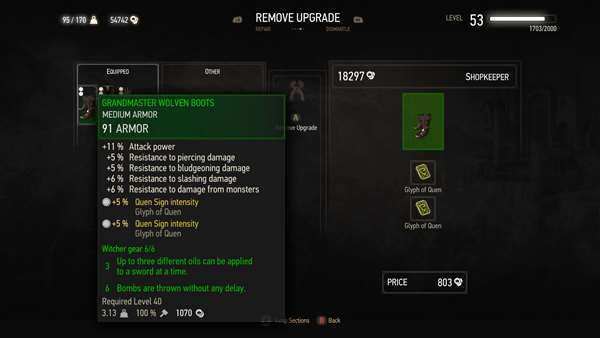 The Standard tier for gear has no prefix in the name (i.e., Feline Boots is just Feline Boots) while each subsequent upgrade adds a prefix or suffix (for weapons) to the name. For example, Wolven Boots becomes Enhanced Wolven Boots and then Superior Wolven Boots, and so on. New Game+ also adds the extra prefix of Legendary, making for some extra powerful equipment. Upgrading to the Grandmaster version of a set will also grant Set Bonuses for equipping 3 pieces from the same set, and another for equipping all 6. These bonuses can prove quite beneficial depending on your build and playstyle. Notably, for Sets that have Crossbows, they do not count towards these set bonuses.

Some Armor pieces in The Witcher 3 can be crafted via Armorsmithing with the right components. This can be performed by Armorers found in all the major cities and some smaller towns, villages and other settlements. Armorsmithing requires you to have first found the Diagram for the specific piece of armor you want. Finding these diagrams are a largely random affair. Except for the Witcher Gear pieces, armor diagrams have no set location. Rather, they can randomly appear in treasure chests across the world or be sold by merchants, although even this source is randomized.

Furthermore, each crafting Diagram has an Armorer Level Requirement, requiring an Armorer of the appropriate skill in order to craft an item. Just as with Blacksmiths, there are three Armorer levels: Amateur, Journeyman and Master. Each level of smith is more proficient than the last and can craft gear at or below their level. An Armorer or Blacksmith's level can be seen in the crafting UI:

Armorers can also repair your Armor for you, as well as dismantle equipment in order to gain Crafting Components and other materials. Additionally, they can socket Glyphs into your Armor that have Upgrade Slots as well as retrieve them. Dismantling a piece of Amor that has Glyphs socketed will allow you to retrieve the Glyphs or you can also have an Armorer remove Glyphs socketed onto an Armor piece, but this will destroy the Glyph, keeping the Armor intact.

All Armor in The Witcher 3

Quick Search of All Armor in The Witcher 3

Note: This list is currently being reworked into a more accurate representation of all armor in the game, including proper level requirements, stats, craftability, as well as lower tier armor pieces that are missing. For now, the list contains only Relic armor.