DLC for The Witcher 3: Wild Hunt covers all additional downloadable content for the game. DLCs, both free and paid, feature new things to enjoy in-game such as Quests, NPCs, Enemies, game mechanics, and reskins for certain NPC characters and Gwent cards. This page contains a full list of The Witcher 3's DLCs.

The Witcher 3: Wild Hunt All DLCs

Free DLC for The Witcher 3

Added with the Next-Gen Update:

How to obtain The Witcher 3 FREE DLCs

PC - GOG Galaxy:
1. On the game page for The Witcher 3 (Library/My Collection/Witcher 3) you will see an “ADDITIONAL CONTENT” section displayed in the right column.
2. Purchase the “FREE DLC PROGRAM” item from there (you will not be charged).
3. In the “More”/”Configure” menu you can choose “Available Content”, which will show the DLCs - tick them, and Galaxy will download them automatically.

PC - Steam:
1. On the game page for The Witcher 3 (Library/Witcher 3) you will see that there are DLCs available - tick them, and Steam will download them automatically as part of its automatic update process.
2. If you have downloaded the DLCs but they still aren’t displayed in the game, restart Steam.

PC - EA Origin:
1. Go to "My Games" in Library and find "The Witcher 3: Wild Hunt".
2. Open the product page by clicking on a game title or the "i" (More Details) icon.
3. Scroll down; in the "Add-ons & bonuses" section, you'll find all the additional content (free DLCs, Artbook, Soundtrack, Maps, Wallpapers, Voice-Over Packs and Artwork). Click "Get It Now"/"Download" on the right to download.

Playstation 4:
DLCs are displayed as “Add-Ons” on the game's page on PSN.

Xbox One:
DLCs are displayed as “Downloadable Content” on the game's page on the Xbox Live store.

The Witcher 3 Special Editions and Updates

Previously known as the Game of the Year (GOTY) Edition, the Complete Edition of the game includes the base game, all past and future updates, as well as both paid expansions in one pack.

Become a professional monster slayer and embark on an adventure of epic proportions!
Upon its release, The Witcher 3: Wild Hunt became an instant classic, claiming over 250 Game of the Year awards. Now you can enjoy this huge, over 100-hour long, open-world adventure along with both its story-driven expansions worth an extra 50 hours of gameplay. This edition includes all additional content - new weapons, armor, companion outfits, new game mode and side quests.

An upcoming update for all versions of the game boasting enhanced graphics, UI, and several quest and quality of life changes. 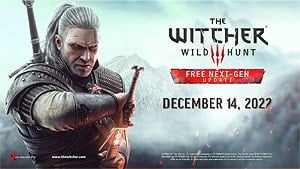 Enhanced with the power of next-gen consoles and modern PC hardware in mind, the upcoming update will feature dozens of visual, performance and technical enhancements, including ray tracing support, faster loading times on consoles, a variety of mods integrated into the experience, and much more! On top of that, we’re adding a set of DLCs inspired by Netflix’s The Witcher series, such as new weapons and armor for Geralt and alternative looks for select characters.

Step again into the shoes of Geralt of Rivia, a professional monster slayer, this time hired to defeat a ruthless bandit captain, Olgierd von Everec — a man who possesses the power of immortality. This expansion to “The Witcher 3: Wild Hunt” packs over 10 hours of new adventures, introducing new characters, powerful monsters, unique romance and a brand new storyline shaped by your choices.

The second and final expansion of the game featuring the new region Toussaint, the Skellige Gwent Deck, and even more quests and items to find.

Become professional monster slayer Geralt of Rivia and explore Toussaint, a remote land untouched by war, where you will unravel the horrifying secret behind a beast terrorizing the kingdom. With all trails leading to dead ends, only a witcher can solve the mystery and survive the evil lurking in the night. Introducing an entirely new realm to traverse, new characters and monsters, Blood and Wine is a 20+ hour adventure full of dark deeds, unexpected twists, romance and deceit.