Mutagens in The Witcher 3: Wild Hunt are pieces of genetic material that can be obtained by killing Monsters. These items are infused with the powers of these creatures. There are two types of Mutagens that Geralt can obtain: Regular Mutagens which drop from multiple Monster types and Special Mutagens which drop from specific Monsters. Both types come in either Red, Green or Blue colors which determines their effects. Geralt can slot Mutagens into their respective slots on the Character Sheet in order to activate their abilities. Special Mutagens are also key ingredients in crafting Decoctions.

Quick Navigation for Mutagens in The Witcher 3

Each tier provides a greater effect than the last. For example, the Lesser Red Mutagen provides 5% boost in Attack Power, while the Red Mutagen and Greater Red Mutagen provide 7% and 10% respectively. Only the Lesser version of each Mutagen color can be obtained as Monster drops, while the higher tiers can be crafted via Alchemy using 3 Mutagens of the tier below (i.e., 3x Lesser Red to craft a Red, 3x Red to craft a Greater Red). With the Blood and Wine DLC, new crafting options become available, allowing you to transmute one color Mutagen for another color of the same tier using various Alchemy Ingredients.

Special Mutagens are named after the Monster type they drop from such as the Alghoul Mutagen, which drops exclusively from Alghouls. Each color has a different appearance from those of Regular Mutagens.

These Mutagens have equivalent effects to the Lesser Regular version of their respective color and can be dismantled into such. However, they can be quite rare and are very valuable until you have crafted all of your Decoctions so it is best to save dismantling any extras for later.

In order to activate the effects of a Mutagen, Geralt can slot it into one of 4 Diamond-Shaped Slots on the Character Sheet. 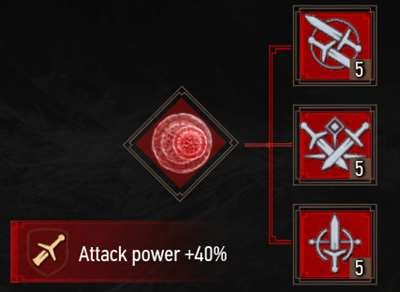 Each of these slots is connected to 3 Ability Slots to which Geralt can assign his learned skills. Matching the color of a Mutagen to the color of the skills attached to its slot will increase the Mutagen's effect by 100% for each skill. For example, slotting a Greater Red Mutagen and then attaching 3 Combat Skills into its connected slots will provide a total of +40% Attack Power (10% bonus for the activated Greater levle Mutagen and another 10% for each skill of matching color slotted).

Not matching slotted skill colors with your Mutagens does not affect you negatively. It just simply does not provide the bonuses, but the Mutagen's effect by itself will still be active.

Note that Special Mutagens can also be slotted to grant the same bonuses as Regular ones. However, their effects are equivalent to Lesser Mutagens only and are more valuable as crafting materials for Decoctions.

All Mutagens in The Witcher 3

Quick Search of All Mutagens in The Witcher 3