Howler is a boss Creature/Monster in the Witcher 3: Wild Hunt. It is a Chort.

One is hard-pressed to name another area of our world more thoroughly riddled with monsters than Velen. there is one silver lining to this sad fact, however' the beasts living there must compete fiercely for hunting territory, meaning monsters often end up killing other monsters. An aggressive chort known as Howler went on just such a fratricidal rampage, tearing a pack of wolves to shreds before attacking and killing a fiend significantly larger than itself.

Howler was a truly fearsome foe. Each one of its blows was enough to kill - only heavy armor or the Quen Sign could protect one from mortal damage. Particularly to be avoided was its charge - and whenever possible, the monster was best attacked from the side.

The Howler is one of the most difficult enemies to kill in the Witcher 3: Wild Hunt. Not only does it have extremely long reaching hits that pack one hell of a punch, but it has a vast pool of health that regenerates over time.

The tight quarters in which you face it, don't do you any favor either, nor does the drop into this area which can take most of your health before the fight even begins.

Have Health potions ready, Quen Sign equipped and prepare for a lengthy fight. It's a good idea to save first as you will more than likely die at least once. I tried this Contract about 8 levels below the suggested one, so it is more difficult than it may be for you.

You are only going to get 1 attack in before needing to dodge, or two if you are lucky or have good timing. After fighting the Howler for awhile you will get into a rhythm. Take the fight slow, learn his attacks and
don't worry about killing him, just make sure you stay alive.

Make sure you dodge his charge attack to the side and try and get a hit in after if you can. Be careful as he can spin a full 180 degrees and hit you in a split second, so don't get greedy.

I highly suggest a weapon with Bleed Chance on it. You can see in the video this mechanic does most of the work for me and so makes the fight considerably less difficult. 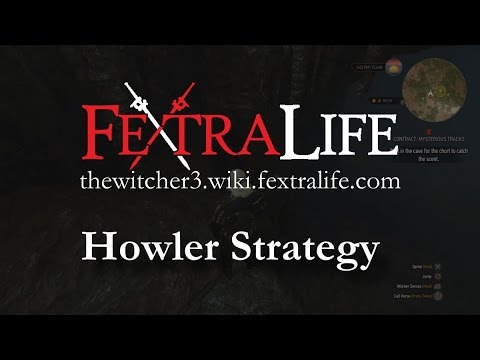