Hunting a Witch - The Witcher 3


Hunting a Witch is a Quest in The Witcher 3: Wild Hunt.


"The notes left by Hendrik, the Nilfgaardian agent, mentioned that On had quarreled with some witch, and that the newt-stewer in question could be found near the village of Midcopse, Exactly where, Geralt did not know -and so he was forced to swallow his manly pride and ask the locals for directions. "

Find the witch by listening to the villagers of Midcopse, There are a few villagers Geralt must speak to and they will be out during daylight. A woman who can be found outside her home sleeping will direct Geralt to speak with the Witche's husband.

Another sourse of information is a grop of woman gossiping outside a house in front of a fire, Geralt can listen to the conversation from a distance, And old man smoking a pipe near the Western entrance of the village will asl tell Geralt the location of the witch. 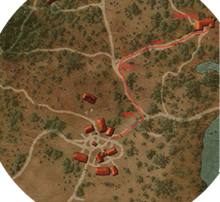 The location of the Witch is at the North of the village,     you can follow the path shown on the map.

Talk to the Witch in Her Hut

When Generalt arrives there is a large group of villagers will be outside the hut asking to the witch for help, they will leave as soon as she tells them that she is done helping for the day.

Inside the witch appears to be missing, Reaching for the skull, it will glow with power and open a portal to an unknown location, where the witcher is located.

You will be teleported to a cavern full of grass and trees, aproach the Building in the center of the cavern, Keira Metz the witch will ask you to come up.

Speak with Keira, she will tell him that an eleve mage has been asking about Ciri, Keira offers to bring you to meet this mage, who is hiding in some elven ruins, Agree to go with her and the quests ends.